I live in NYC and constantly see restaurant delivery guys zipping around on bicycles. The day I first saw one of them accelerating without pedaling, a seed was planted in my mind. That seed has grown into a small tree resembling a very fast bicycle.

There are many benefits to biking in NYC, only some of which are provided by a motorcycle, and all of which are enhanced by adding an electric motor.

I chose to have a 1000W 48V front wheel hub motor kit for my ebike which I purchased off eBay for $151. It’s important to note that most ebike enthusiasts would recommend a mid-drive motor or a rear-hub motor. However these are more complicated to install and usually more expensive. I don’t know much about bikes so I chose a front wheel kit with the entire wheel and tire. The kit I got included everything but the battery and torque arm.

It is important to have a torque arm (or even two) if you are using a front motor! Otherwise the motor can snap the dropouts (where the axle of the wheel fits into the bike frame) causing the wheel to fall off the bike while you’re riding it and sending you flying over the handlebars at 30mph which could literally kill you.

Torque arms cost less than $20 so this is a no brainer. Since my frame is steel I went with just one torque arm, if your frame is aluminum (it probably is) you should probably get two.

Electric bike batteries are very expensive, usually the most expensive part of an ebike by far. You do not want to by old school lead batteries as they are heavy as hell and they won’t provide as much power or range, and they’ll be dead faster.

I learned a lot about batteries in general during my ebike research and especially rechargeables which are most often comprised of multiple 18650 cells, which power everything from box type handheld vaporizers and flashlights (1 cell) to ebikes (approximately 52 cells) to Tesla Model S (approximately 6800 cells).

A popular place to buy new batteries is Luna Cycle or em3ev.

I got a used one on eBay which has so far turned out to be a great deal. It is 48v (though it was listed as 52v) and 13.5ah. The volts are the power, the amp hours are the range (I think.) I paid $312 with free shipping. I think this is probably about a $500 battery/charger set (new, at the time). So far so good. My battery came with a mount which screws into water bottle holes on the frame. The mount has wires to connect to the controller. The battery then slides onto the mount and secures with a lock and key. One issue I’m having is with the small plastic clips which hold the battery to the mount – so far 2 out of 6 have broken off while I was carrying the bike (I keep it inside and have to go upstairs).

My kit arrived first, which gave me time to install it all nice and clean on my bike.  First problem – the axle didn’t fit in my frame dropouts.  Good thing I have a rotary tool AKA a Dremel (mine is actually Black & Decker).  I grinded off the paint from the dropouts and the wheel fit in.  My daughter enjoyed watching the sparks fly 🙂

The battery came a couple days later and I was super psyched for my first ride.  It was amazingly fun. But extremely bumpy.  I decided to get a seatpost with suspension.  These can be quite expensive (over $100) and I imagine that the very expensive ones feel like riding on a cloud.  But I didn’t want to spend that kind of money so I got one on Amazon for about $30.  It definitely helps a lot,  potholes no longer feel like I’m smashing my tailbone with a hammer.

I also got a padded seat to mount on my bike’s rear rack so I can take a passenger.  You’ll also need some bike pegs for your passenger to rest their feet.  While you definitely feel the speed reduction when carrying a passenger, it’s still powerful enough to get going faster than I could by pedaling solo.  I modded it with some thumb screws so I can get the backrest on and off easily.

I have hit a top speed of 32mph on my ebike which feels VERY fast.  Don’t forget to wear your helmet!

Previously I had a regular old desk with two 24″ 1080p monitors. Not a bad setup, but I wanted even more screen real estate and even more floor space. I had heard about 4k and the price was finally coming down. I had a vision in my mind, but decided to take it step by step.

The first step was to wall mount my older 50″ 1080p Plasma TV which would get me some floor space in the living room right away, and allow me to make sure the walls in my old apartment would handle this. I ordered this Mount-It articulating wall mount which after a lot of Amazon browsing had the most (13 inches) of vertical adjustment I could find, found a suitable beam in the wall using a studfinder, and pretty much just guesstimated the height I wanted to attach the mount to the wall, since I wasn’t sure if the new TV would have the same mount pattern as the old one anyway. When this was done I was already happier with my home. I gave away the TV stand and sold my 15 year old home theater system on craigslist.

Of course, my hackintosh daily-driver computer was still using a graphics card from 2008, which didn’t even support HDMI, much less push a 4k resolution. So the first step was to upgrade the graphics card, and the OS along with it. I got a GeForce GTX 950 and got to hacking. A day later it was installed. Of course I was still using my dual monitors and had no idea if the card was going to push 4k properly yet, but I was on to my next step.

I placed an order for a 50″ Vizio 4k LED TV on Amazon. I went with 50″ as it was the same size as my old TV, but really I would not recommend anything larger than 50″, and might even suggest a 46″ inch or smaller as a monitor. It’s simply not comfortable to look at things on the far side edges of the screen.

I also purchased an HDMI 2.0 cable (because older HDMI cables can’t handle 4k) and a Club 3D Displayport to HDMI adapter because some people on the Internetz suggested it might be necessary.

I worked from home on the day of the scheduled delivery and was quite excited when it arrived. I unboxed the TV, hooked everything up, aaaaaaannd… black screen. Rebooted… black screen. Upon closer inspection the display was cracked and there was a hole in not just the retail box but the outer shipping box as well. Wow. I arranged the return/exchange with Amazon and worked from home the next day too.

This time everything worked and I had a simply gigantic monitor and a smile to match. I took down the old TV, put up the new TV, brought my computer into the living room, put a piece of wood on top of a (musical) keyboard stand (which I already had) and started enjoying my new standing desk. Actually I found that standing on the floor barefoot was rather uncomfortable, but instead of buying a standing desk mat I just used my extremely comfortable Nike slippers. I then put my old desks out on the curb and posted a curb alert in the free stuff section of craigslist.

The new TV is great, I don’t have a ton of experience with smart TVs, but I do like that it has dedicated buttons on the remote for Netflix, Amazon video, and iHeartRadio. It also requires no Chromecast as it has that tech built in. I was slightly worried about 1080p content scaling up, but it works flawlessly.

I placed an order for another mount and waited with this ugly keyboard stand/plank of wood combo in my living room. At least it was adjustable, albeit in a very cumbersome manner.

When the mount came I did a whole bunch of measuring and then finally screwed it into the wall. The 13″ adjustment of the mount (again, this was the most I could find) doesn’t leave a ton of room for error. I’m 6’1″ tall though, so maybe if you’re not, it won’t matter as much. I screwed the IKEA Lack wall shelf directly to the regular TV plate already on the mount, on the lowest position. This allows me to rest a tablet against it. I am considering different bracket options for this, as I don’t find it completely aesthetically pleasing. I mounted another shelf lower on the wall for the computer, although if you have a smaller PC case or a laptop, the whole minimalist feel would be greatly enhanced.

Finishing off the theater aspect, I mounted a VIZIO SB4051-C0 40-Inch 5.1 Sound Bar System with Wireless Subwoofer & Rear Satellite Speakers (the stock TV speakers were not at all sufficient for my tastes) underneath the TV using these QualGear Universal Sound Bar Brackets, which were the cheapest I could find on Amazon.

Some other cool stuff in the photo you may be interested in:

Planned future upgrades include a wireless keyboard and mouse, and doing something about that rat’s nest of wires. Feel free to leave questions and/or suggestions in the comments! 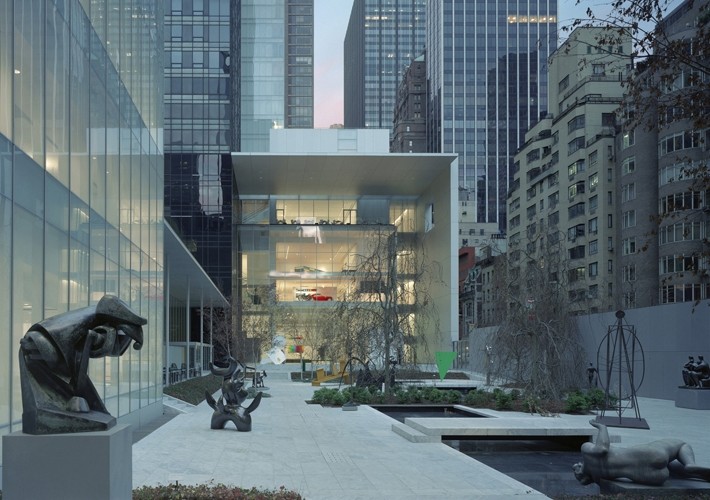 Brought to you by EmojiStuff.com, use the money this helps you save to buy something from the online store owned by the creator of this calendar 😉

Certain museums in NYC are free only on certain days or certain hours. This calendar shows those museums. There are other museums which are free or pay what you wish every day (for example AMNH), those are not listed here.